In 1963, a constitutional amendment was passed by the NJ Legislature, allowing a property tax valuation based on agricultural or horticultural use. The following year, the Farmland Assessment Act was passed.

Widely publicized as an effective and low-cost solution to conserving open space in New Jersey, the Farmland Assessment Act blended the desperate need for property tax equity by farmers with the conservation and scenic concerns of the urban population. 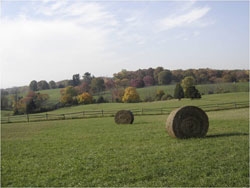 As property taxes increased in the late 1970’s and early 1980’s, sometimes dramatically, many forest land owners began to apply for Farmland Assessment. This trend was first reported by the Division of Taxation in 1976, when 47,825 acres of non-appurtenant woodlands were recorded, compared to 297,687 acres of total woodlands.  Landowners used the justification that trees were “plants… useful to man.” Many within the NJ Forest Service and the forestry and conservation community were concerned that the Farmland Assessment Act, as it then existed, could favor excessive and unnecessary cutting of trees, and would undermine foresters’ authority to justify judicious and necessary harvests.

Therefore, in 1986, the Farmland Assessment Act was modified to standardize forest planning and establish criteria for practicing foresters.  At this point language was inserted so that excessive and unnecessary cutting would disqualify a property from receiving Farmland Assessment.

In 2010, the NJ Forest Stewardship Act was signed into law.  This law modifies the way that forestland can qualify for Farmland Assessment if a qualifying Forest Stewardship Plan is developed and is being followed on a property.  This law is not currently in effect, and the implementing regulations have not yet been written.